Create an Account - Increase your productivity, customize your experience, and engage in information you care about.

On Saturday, May 7, Portland citizens will consider a bond election to improve and expand facilities in Portland. The project will include:

A bond election is an election in which voters are asked to consider authorizing the City to sell bonds to pay for a project. Bonds are paid back over time. If approved by voters on May 7th, the City will sell up to $25,200,000 in bonds to finance the parks and recreation projects.

After years of discussion by citizens and elected officials, the City Council appointed a Bond 2016 Exploratory Committee of citizens and stakeholders to study the needs of the community and make recommendations to the City Council. Working with preliminary plans, the committee was given guidelines to help them in their deliberations and asked by the City Council to research the preliminary plans and existing facilities and determine if the proposed improvements were needed and if so, the probable costs of those improvements.

The Committee met on three occasions. During the in-depth meetings, representatives from City Staff, consulting engineers Coym, Rehmet & Gutierrez, consulting architects Richter Architects, consulting financial advisers from Frost Bank Capital Markets, and city legal representatives, McCall, Parkhurst and Horton, LLP, presented information and answered questions about the proposed projects, costs and financing methods, the bond election process, and the tax implications of a bond sale. The committee, representing a cross section of the community, considered the various improvements as well as the probable costs and tax implications associated with those improvements.

On February 2, 2016, the Committee delivered its final report to the City Council recommending that the City Council call a special bond election in the amount of $25,200,000 to complete renovations and expansions at the facilities studied. The following sections outline the proposed projects recommended by the Committee.

The Daniel P. Moore Community Center was built in 1994. The facility is heavily used. This project would rehabilitate interior and exterior elements, reconfigure interior spaces, expand the size of the current ballroom, and create an accessible entrance on the west side of the building.

Two of the City's sports complexes (Municipal Park and the Sports Complex) support baseball and softball league play. This project would consolidate all baseball activities at the Municipal (13-Acre) Park and construct a youth football field at the Sports Complex. The projects would include rehabilitation and expansion of all existing facilities and add various amenities to the parks. 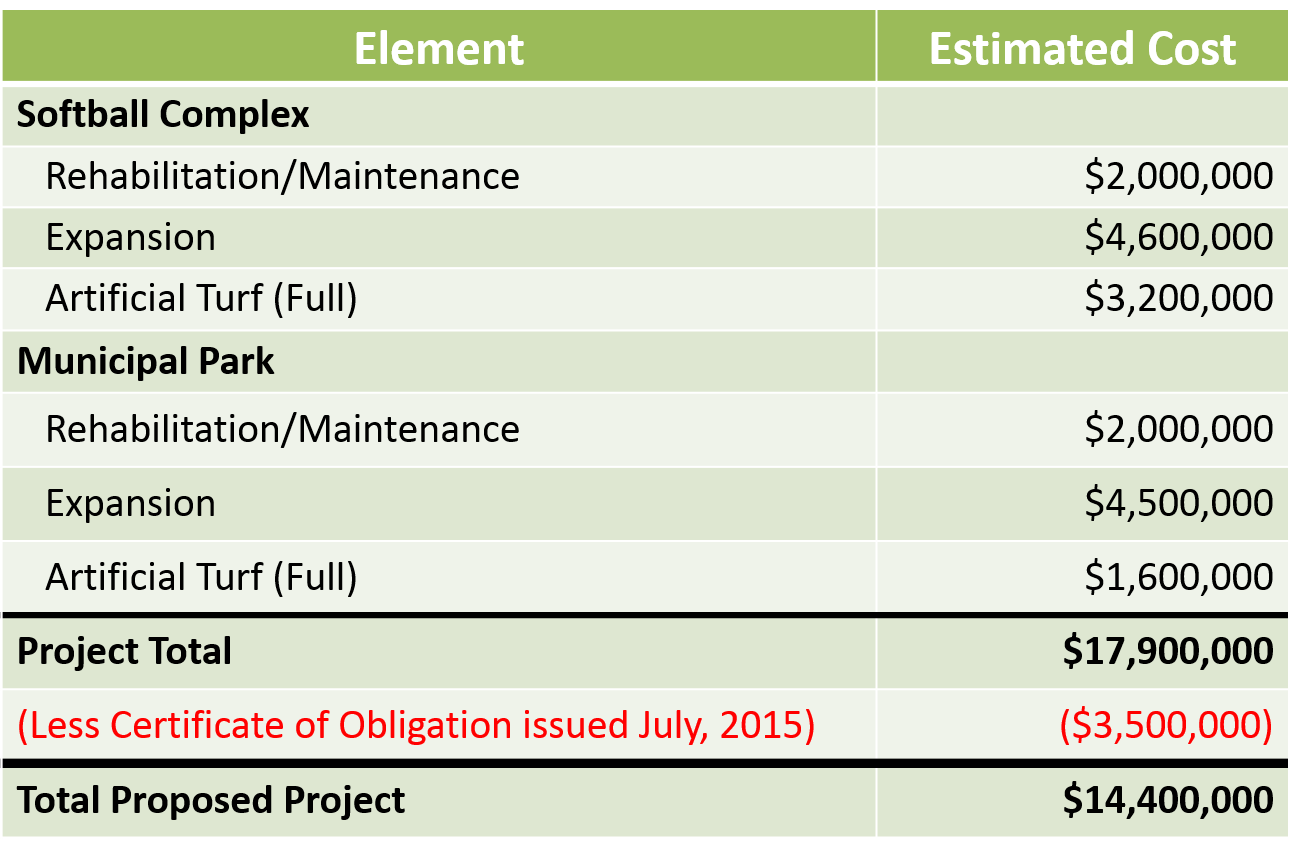 If approved by voters in May, the City of Portland will sell two or more general obligation bonds over a three-year period totaling not more than $25,200,000. General obligation (GO) bonds are secured by a pledge of ad valorem (property tax) revenues generated from the Interest and Sinking (I & S) portion of assessed property taxes. The purpose of dividing the bonds into two or more sales is to help minimize the year over year tax rate. Combined, the sales will generate a peak projected increase in the I & S rate in 2019 of approximately 6 cents.

This projection is based on a number of factors including the anticipated growth of the City’s tax base, the timing of the bond sales, and the market conditions at the time of those sales. According to Zillow®, the average "market value" of a home in Portland today is $156,500.00. For tax calculation purposes, the average "taxable value" is used. The peak tax impact to the homeowner is estimated in the following chart based on the average home which has a taxable value of $150,000.00.

Note: This chart only reflects the impact of these GO bond issues and does not include any additional tax liability that could result from the issuance of debt for other projects like streets, drainage and other capital and/or operational budget expenditures.

Actual tax rates, interest rates, maturity dates, aggregate outstanding indebtedness and interest on such debt, will only be established and known at the time the bonds are issued. In addition, actual tax rates will depend upon, among other factors, the assessed valuation of taxable property, prevailing interest rates, the market for the City's bonds and general market conditions at the time the bonds and notes are issued.

Why has the City of Portland called a Special Bond election?

The City Council appointed an ad hoc exploratory committee made up of a cross section of citizens to study the needs of the community. The committee recommended that the City Council call the election to allow voters the chance to decide on expanding and rehabilitating the Community Center, Municipal Park, and Sports Complex.

What is the tax rate impact of the proposed bond?

If approved by voters in May, the City of Portland will sell two or more general obligation bonds over a three-year period totaling not more than $25,200,000. General obligation (GO) bonds are secured by a pledge of ad valorem (property tax) revenues generated from the Interest and Sinking (I & S) portion of assessed property taxes. The purpose of dividing the bonds into two or more sales is to help minimize the year-over-year tax rate. Combined, the sales will generate a peak projected increase in the I & S rate in 2019 of approximately 6 cents.

For a more in-depth look at the GO issue and year over year tax rate impact, refer to the Tax Rate Impact Analysis.

How would the tax rate change if if the bond was not approved?

The I&S tax rate is the rate necessary to service the City's debt. If the bonds are not sold for this project and no other debt was incurred by the City, the following chart shows how the tax rates would compare over time.

What is included in the Community Center Expansion project?

The Community Center, built in 1994, is at its operational capacity and has not been refurbished since its opening. This project would rehabilitate interior and exterior elements, reconfigure interior spaces, expand the size of the current ballroom, and create an accessible covered entrance on the west side of the building.

What is included in the Sports (Softball) Complex and 13-Acre/Municipal Park projects?

The City’s sports venues (the 13-Acre/Municipal Park on Memorial Parkway and the Sports Complex on Buddy Ganem Drive) have not been significantly rehabilitated, reconstructed, or expanded since their original construction in 1968 and 1977, respectively. If approved by the voters, the all of the City’s baseball fields will be consolidated at 13-Acre/Municipal Park with three additional fields, added parking and other amenities. The Sports Complex would be reconstructed with four softball fields, a youth football field, practice spaces, additional parking and other amenities.

Why can't the various parts of this bond issues be separated so I can pick the projects I like?

Bond issues ballots are separated into distinct questions when diverse types of projects are proposed, like a new city hall along with street improvements and recreation improvements. In cases where the bonds fund a single class of projects, such as improvements and expansions at park and recreational facilities within the city, combining the project can give the City more flexibility and create a better value for taxpayers. I've heard the plants and industries in the area get tax breaks. Why can't they pay their taxes so we don't have to pay for these projects?

Some new industries in the area may get tax abatements from other governmental units like the school district or county, but the City of Portland has not given any tax abatements to plants or industry because none of the recently constructed industrial projects are inside the Portland city limits. Only businesses inside the City are taxed.

How will this bond issue affect homeowners who are over 65?

Homeowners 65 years and older, who have a qualified homestead exemption, will not see any City property tax increase as long as they remain in the same residence and do not make any improvements that increase the taxable value of their property.

Will these projects increase the potential for revenues to the City?

The Daniel P. Moore Community Center receives revenue from rental of the existing rooms and facilities. If this bond election is approved, the additions to the building will create the opportunity for increased revenues. Expansions and renovations at the sports complexes will create the opportunity for tournament play and increases in "sports tourism." Attracting out of town visitors to local sporting events can increase sales tax and hotel occupancy tax revenues for the City.

How do I know the City will spend this money on the described projects?

State law and the strict covenants on the bonds requires the City to use the funds for their intended purpose.

Why did the Bond 2016 Exploratory Committee recommended artificial turf for the athletic fields?

City Staff and the engineering consultants initially recommended natural grass fields. However, the Committee carefully explored the maintenance requirements of the fields. After factoring in drainage concerns, irrigation costs, and playing surface quality and reliability, the Committee recommended artificial turf for the fields.

In 2011 a Penn State study found that “concern that infilled synthetic turf [playing fields] harbors and provides a breeding ground for S. aureus bacteria is unwarranted.”